Finally! I have time to do a detailed write up of our Arizona Trail bikepacking trip this past April. Thank you for your patience. And, yes, enough time has now passed that we’ve been talking about finishing it!!

Check out earlier posts here, here, and here and scroll back through my Instagram account (@active_women) for photos.

We arrived in Tucson around 1pm. Jittery (we were so nervous about our bikes either not making it or being busted), the bikes emerged from oversize with minimal damage, although they had clearly been opened and checked. Gingerly taking out each part, Adam took care of assembly while I pumped tired and filled water bottles. Our shuttle drive picked us up at the arranged time and we were off to Sierra Vista!

It took took us quite a while to get to the trailhead at the border at Coronado. En route, we stopped for some food supplies and grabbed delicious burritos for dinner at the trailhead. This burrito was quite possibly the best burrito I’ve ever had, and we hadn’t even started so it wasn’t one of those hunger-induced delicious meals: it was just a delicious burrito. While we were eating, I got to see a road runner (which made me so happy!). Instead of doing the 5 mile round trip down to the border, we opted to take the less-than-2 mile round trip hike to the top of Coronado mountain (2092 m) to make our “official start” to the trail.

Hikers take a trail through the Coronado National Forest; bikers take a forest road. We set off into the sunset (literally – it was a beautiful sunset that we rode into! The desert sure knows how to do sunsets!), not really having any real destination in mind. We had a solid supply of water to last us until the furtherest potential water source, if need be. I knew we didn’t really want to be camped on the road nor on a spur road. There would likely be quite a heavy border patrol presence plus other people out quadding or off-roading and we did not care to be struck by a vehicle on our first night. About 5 miles down, we came to Bear Creek that was still trickling enough to get water from and had a great flat area. With the sun rapidly setting, we pitched tent and got our sleeping gear out. You may recall from the earlier overview/update post what happened next: Adam’s air mattress had a leak. It was more like a gaping hole and, to this day, we cannot figure out what happened between when he tested it at home and when he pulled it out at camp. I pulled out the patch kit and he got to work cleaning the area in an attempt to have it hold at least a little bit of air until we got to town…luck was on our side! We were able to patch it up and not only did it hold that night, but for the rest of the trip!

My final comment in my journal: When did this tent get so small?! I have a 2014 Big Agnes Fly Creek UL2, which is fine for me or me and one other person of normal size but Adam is…bigger. It was a tight fit! 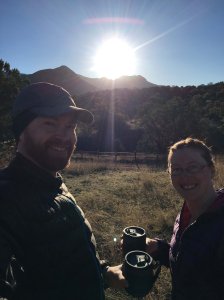 We woke to a stunning sun rise coming up over the mountains. Yup…this is the exact reason I love being out and doing these trips. Although we were up before the sun fully rose, it was 9am before we actually got on trail as we had to repack food and readjust seats and gear. We started out with a few more miles down the forest road before we connected with the single-track of the AZT.

The AZT decided to throw it all at us on our first full day, humbling both of us. We had 30C, full sun; steep ups and down we had to push; massive chundery, loose, baby heads. We were exhausted by the time we found a camp. Part of this exhaustion was due to poor sleep the night before. I always find my first night in a tent rough and it takes me a day or two to acclimate to the tent life again. It was exacerbated by the constant stream of border patrol vehicles, stopping and shining a light over our tent and gear. Although I was expecting this – the number one crossing for illegal migrants happens to be very close to where the AZT starts – it was still startling. And the migrant trash…

Pushing up the single track…! 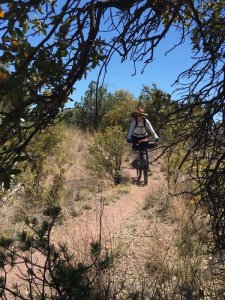 The “trash” that we saw was someone’s possessions. These possessions have a story and a history. They belong to a person. It is truly heartbreaking what people are forced to go through in search of simply trying to find a safer existence and here we are out biking this route for enjoyment. I know my privilege.

Around 6pm, we rolled into Canelo Pass Trailhead. We thought about stopping here but with no amenities (read: not even an outhouse), we opted to try to get through the 200 m climb instead of being faced with that in the morning. As we crested the top with the sun – and the sun definitely set fast down there – we found ourselves on a steep exposed hillside that forced us to keep going down as there were zero spaces for a tent on this side-cut trail. Utterly exhausted, we rolled into our camp after putting in 24 miles.

Another 30C day and I struggled eating all day, sure I was going to hurl at any point. Heat exhaustion (heat stroke?) was clearly setting in and becoming a factor. I did my best to cool off in shade where possible but at one point we were riding on pavement.

When looking at our map and anticipated mileage for the day, we noticed that we had 15 miles of mostly “down” to look forward to. But, once again, the AZT would not allow for us to get by easily! Although it was “net down”, there was sufficient pushing involved and that 15 mile “down” still took us 5 hours, including me having a tumble on a switchback (loose gravel that I skidded out on). This section was up and down through small(ish) looking valleys on the map but, in reality, involved fairly steep down (that was rideable, but obviously loose) followed by a short but steep push up.

We were wiped…but managed to get into Patagonia and headed straight for a store to grab cold drinks, drinking most of it before we even got to the till to pay! We then proceeded to rest under a pavilion in town, laying on the cool cement floor. I was still not feeling well but didn’t want to stop in Patagonia so loaded up and we rode towards Sonoita (the pavement ride) to restock at the dollar store. We were entering a ‘no camping’ area (privately-owned ranch land) plus racing daylight. The second we crossed into public lands, we found the first flat spot and did our best to avoid cow patties and cacti. As the sunset and the temperatures cooled, I finally found myself ravenous and devoured the gas station sandwich we had bought earlier.

The sandwich – full of much-needed sodium – did the trick and I went to sleep feeling satisfied and uplifted, knowing I managed a 30 mile day.

Days 4-6 in progress and will be posted soon. Be sure to sign up for updates!