Heck yes! (*spoiler alert!*) Carol did it! CONGRATULATIONS! She’s provided a summary of each day of the three days. Here’s Day 1.

My crew and I arrived in Penticton on Thursday, and made our way to get checked in and pick up our supplies first – then to the hotel. Because of a last minute family emergency, our third crew mate wasn’t able to make it but Lindy and Roxy had everything well in hand! Penticton was at least as hot and smoky as the Kootenays (my training grounds), if not more so.

We got to meet the other 13 athletes and their crews at a welcome dinner and briefing that day.  We also had our first baseline medical testing (weight, blood pressure, pulse, oxygen levels). Folks were there from Canada, USA,  Japan, Spain, and Mexico. Some were ones I already knew, some I had heard of, and others were soon to be new friends.

Friday we had a breakfast meeting and then went out to view the swim course. The first leg of the swim is about 8km long and we were shown the far point of land to head for. In her wisdom, Roxy took compass bearings – there was no telling if we would be able to see that point if the smoke got worse. Final preparations were made and we had an early night: 4:00 am comes early. 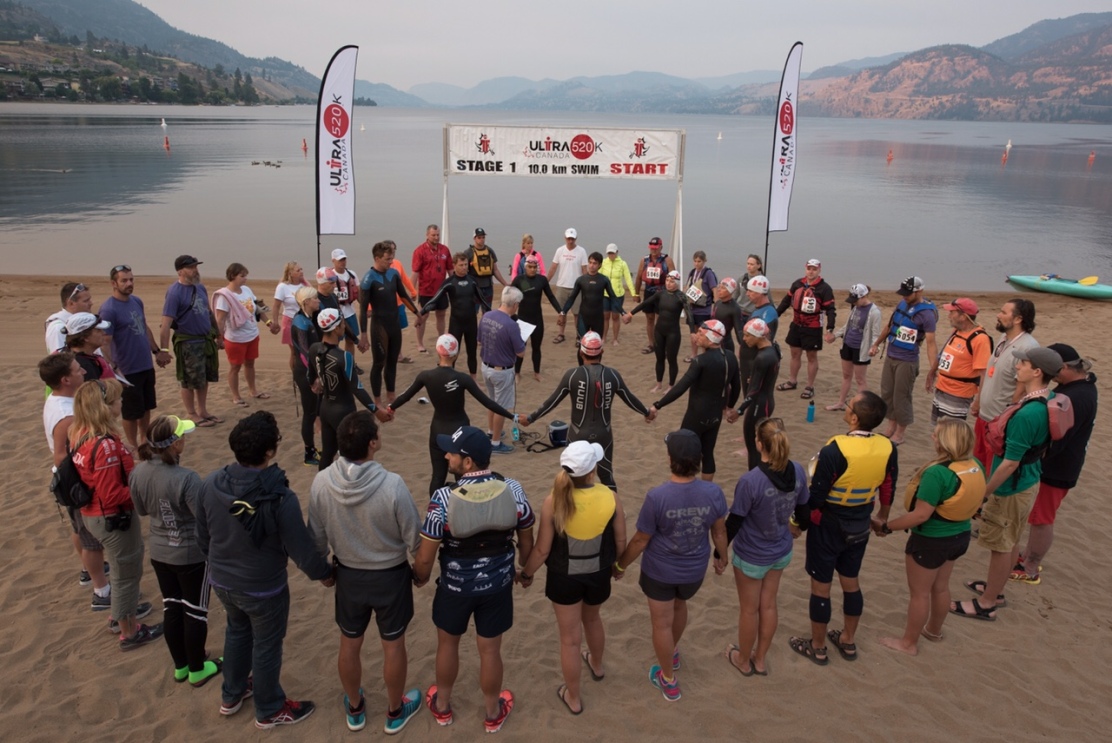 We were welcomed in to the sound of bag pipes. Athletes formed a circle on the beach and crews formed a second circle around them. Our water escorts headed into the water before us. In a double kayak, Liz was my paddler and Roxy was in charge of food and navigation. Our plan was to let me swim for one hour then stop so I could take in some calories. Swimming is not my strength and I’ve never swam as far as 10k. I’m not nervous in open water, but I’m not at all fast. I’d also had leg cramps in the night which was not a good sign. The water was like glass to start, and then it began to feel as if I was being pushed from behind. I thought Liz had managed to get us into the current that flows from the Channel between Okanagan Lake and into Skaha. Turned out it was just the wind, coming from behind and kicking up waves. As these grew, swimming became more challenging and I swallowed my share of lake water. We tried a few variations of my placement in respect to the kayak hoping that if it might be able to break some of the wave action for me, but in the end, I just had to enjoy the exhilarating feeling of body surfing combined with near drowning. The waves did seem to help with speed though – in general, swim times were faster than usual, and I was almost 8 minutes faster than I expected my best time would be.

Lindy, (who is putting the final touches on her training for an Ironman race in 3 weeks and squeezed in a run while waiting for us to do the swim) set up my bike and clothes so they were ready to go. After nearly 4 hours in the water, I was a bit off balance, so I needed a lot of help! Once on the bike, the first 500 meters or so are a steep climb onto the road – then we had a nice flat stretch to Osoyoos.

Roxy, me, and Lindy.

There are usually 4 critical areas that need to managed in an endurance event: hydration, nutrition, heat, and pacing.  This year, we also had the smoke, and for me, my asthma. I also had to be prepared in case of a bee sting. My crew took control of nutrition. They gave me 150 calories worth of food every 45 minutes, a bottle of electrolyte drink every hour, plus as much water as I wanted to drink and/or wear. I took 1 or 2 salt capsules every hour. I wore cooling sleeves which I soaked with water to manage the heat.  My crew also had super soakers to spray me as I went by.

The 149k bike on day 1 included quite a few hill climbs but it was the final long climb to Yellow Lake that nearly did me in with the smoke and heat. Despite the inhalers, breathing was laboured, and I was getting light headed. As a result, the quick downhill to the finish line in Okanagan Falls felt a bit harrowing and I was far more cautious than I might have normally been. 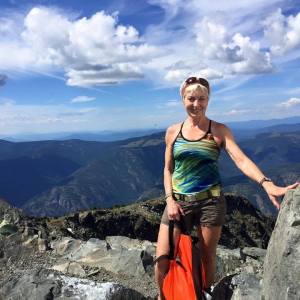 Carol is a “woman of a certain age” with spunk (she’s 58). She recently completed the incredibly prestigious Ultra520K where she had to apply and prove she was capable of such an arduous competition. Upon completion, she is now the oldest female competitor to complete the Canadian event! Check out her first post here.