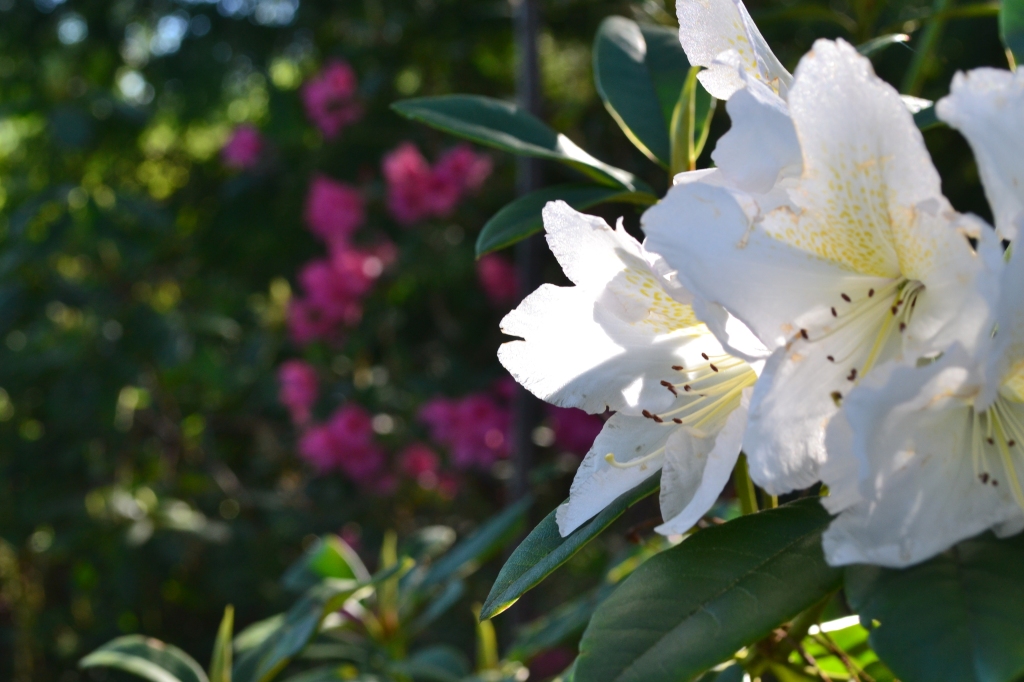 Yup – 24 km. Let’s call that an “oops” as it was definitely not planned! The Rieveley Hut was about 16 km and given we had made the first 16 km so early the day before, we discussed pushing on a bit longer for Day 2. Our map showed us a campground about 3 km past so we tentatively set that as our plan, all depending on how I was feeling.

How was I feeling? Overall, pretty darn good! I had swelling on my ankles and knees and the downhills did bother my knees but considering I had hiked 16km the day before, I’m not entirely sure how much was lupus and how much was “I just hiked 16km”. I experienced standard and expected soreness in muscles but nothing overwhelming or too concerning. I had, of course, my mandatory daily meds plus I had some emergency back-ups in case things went poorly. I’m happy to report that I didn’t even need to take a Tylenol. 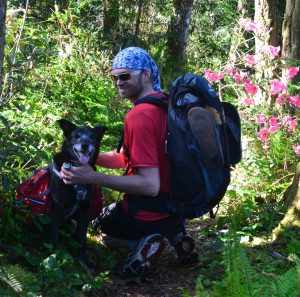 We lingered over our coffee that morning and shared one of the two store bought packaged items I had stuffed in the pack at the last minute. It was an apple crisp-type of oatmeal and we devoured it. Our map showed a descent followed by an up-and-over another hill. About half-way up the climb, we ran into some day hikers going in the opposite direction to the Manzanita Hut. Excitedly, they informed us there was a huge patch of wild rhododendrons just around the corner. They were not exaggerating. Exiting out of a clear-cut area, we came back into the forest and the variations of green we had become accustomed to exploded in red, pink, and white blooms (top photo). I’m unsure why there would exist such a patch as it was quite isolated (can any botanist or forester explain?) and we didn’t see anything else like it on the rest of the trail. It was just so pretty! 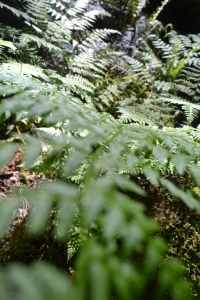 The day had us hiking up and down. Although it is described on the Sunshine Coast Trail’s website, it was very evident that this trail was not developed as a long-distance trail but was a result of linking many previously built, local trails together. The trail(s) itself was significantly more rugged than I had expected. It is toted as a “family friendly” trail, which led me to believe that families with infants on their backs or small toddlers could handle this trail, including the suggested 3-day itinerary on their website. I would disagree. It was not a technically difficult hike. It was, however, more rocky and root covered than I anticipated. I tried to envision a family with a 4-year-old and an infant in a backpack covering that ground. Absolutely, there are families that could do that. More realistically I think you’d end up having a number of very unhappy meltdowns and tantrums by both children and adults. 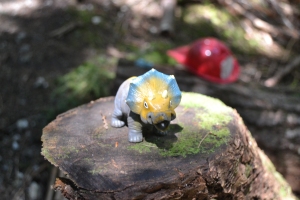 Once again, we marvelled at the “green-ness” of the trail and stood in awe at the base of huge firs (or stumps of formerly huge firs). We came upon the Trinket Trail and a decision. A side-trail that looked very intriguing, it would have resulted in a significant detour. Per a local’s suggestion, we had been keen to take the Gibraltar lookout alternate and so we skipped the Trinket Trail. Although perhaps a wee bit sad on missing that, I can confidently recommend any future hikers to make the little bit of extra effort to take in the views offered at Gibraltar! Stunning panorama of Powell River, the Strait (a.k.a. ocean), and the snow-capped peaks on Vancouver Island. Wow, wow, wow!

We arrived at the Rieveley Hut at about 3:30pm. Earlier in the day, a boy scout-esque group (not exactly sure what kind of group they were but something like that) passed us. Had we been unsure if we wanted to cut the day short or carry on, the thought of spending the evening with 6 or 7, 14 year old boys made the decision pretty easy! We finally had the opportunity to meander (as per the website) and strolled down, enjoying the rushing water and waterfalls beside us. Arriving at Appleton Creek, at first we were thrilled by the sight of the beautiful river and rudimentary tables and chairs. Upon closer inspection, we could not identify a flat area to pitch the tent. We wandered around looking and although I found one half decent area, it was in a not ideal location, away from the rushing water and a perfectly situated bug haven. It was about 5:00pm and we were (surprise!) hungry, making us both pretty tired. I made the decision to first make some dinner and, hopefully after some food, we could decide what we wanted to do afterwards. Being only 5pm meant had about 4 hours of daylight left. Add to that the lack of good tent site plus the prospect of sitting in an area where the bugs would soon get worse, we consulted the map! 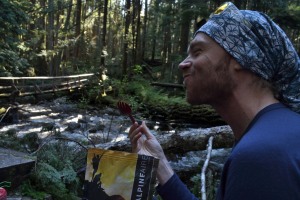 Dinner went down a bit easier this time (although calling it “good” may be an overstatement). Hunger can do amazing things to the tastebuds. I dug out the last of my surprise meals for us: a chocolate mud pie. It was basically chocolate pudding. I do not have a photo of my face but you can believe me when I write that the supreme look of satisfaction on Adam’s face mimicked mine! We topped it off with mochas (coffee + hot chocolate) and, with a bit of energy in us, I suggested we keep moving. It was still quite early and there was a forest-road access parking area about another 2 km down which, although again wouldn’t be great, at least there should be a flat area and it wasn’t too far for me if I started to feel terrible. 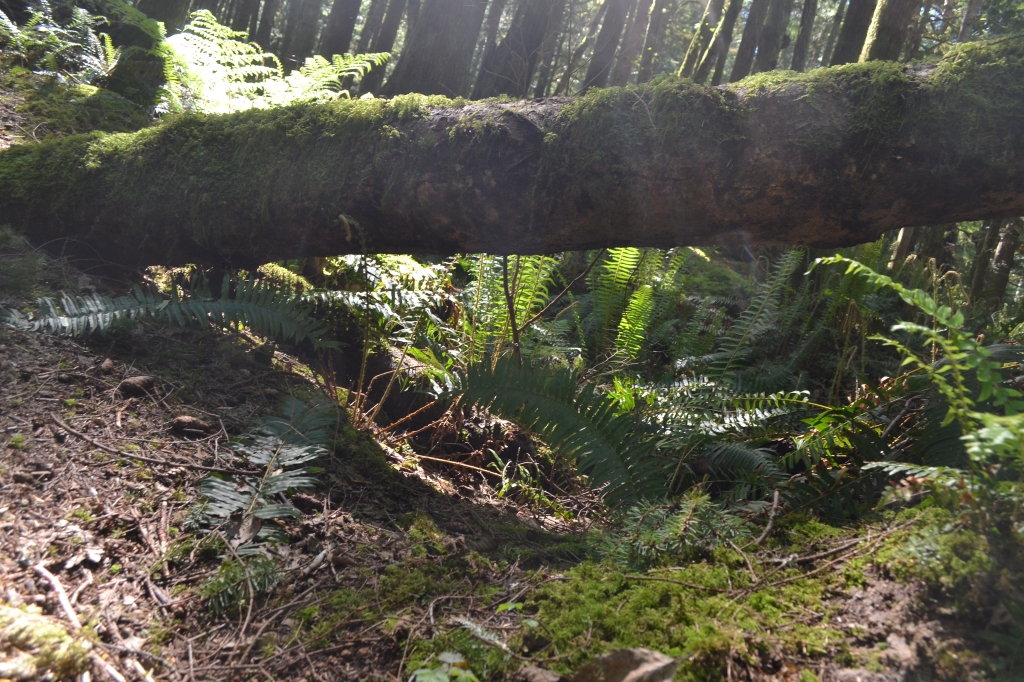 The next 2 km went by pretty quickly and there was a map at the parking area, which was little more than a cleared 4×4 access. Flat, yes, but it was still early in the evening and I was apparently wired on sugar and caffeine now. I looked at the map (which conveniently showed elevation) and announced I could make it to Sliammon Lake. Unsure, Adam cautiously asked since it would result in a 24 km day. I assured him I’d be fine. Stopping at Sliammon Lake was another amazing decision we made. This was one of the most beautiful campsites I have ever experienced. Situated on a quiet lake, the tent areas were soft and flat, clear and fast flowing water fed into the lake, the outhouse was well maintained, and pre-chopped wood was stocked for fires. Our only regret is that we did not arrive here early in the day nor had the time or food to spend an extra night. As the fish jumped, we had a small fire overlooking the lake and then climbed into our tent with a symphony of frogs to lull our tired bodies asleep. 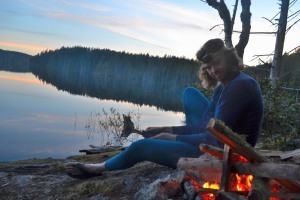 PSSSST! Are you following me on Instagram @active_women and have you liked the Active Women Facebook page? Additional photos are shared on both!