Feminism! Ohhhhh…so scary to say, isn’t it? And for some reason, very difficult for people to identify with. I admit that it’s only been in recent years where I can proudly claim the label of being a “feminist”. I, too, was often misled as to what the definition is: equal opportunities. Truly, it’s that simple! Feminism is about giving women the same opportunities for success that men have. (Yes, yes, you caught me! This blog has, once again, been inspired by events and statements occurring the US. Most recently, Kellyanne Conway’s comments about not considering herself a feminist.)

It really is amazing the impacts this word has on people and the confusion it creates, in spite of its plain simplicity. I have friends and family – male, female – that adamantly insist that the concept of feminism is no longer valid and that men and women ARE provided equal opportunities. The blame is put on the woman who may be experiencing difficulties as those difficulties being “their” fault. They didn’t work hard enough, they were ill or under prepared, prejudice just doesn’t exist. Of course, there are examples of individuals (of all gender, colour, and orientation) who will coast through life blaming everyone and everything for their difficulties but to not understand nor recognize the systemic barriers that are in place against women always ends up baffling me. There are numerous, evidence-based studies and research showing these barriers and prejudices that exist.

I’ve had the opportunity to work in the field of women in the workplace and that information has transitioned to and complemented what I know about women and sports. There are fewer female photographers and videographers to record female athletes. Of female athletes that are able to make it in their field professionally, they are paid less in sponsorships and prize/contest money, and are often required to have a particular (“feminine”) look that is usually quite sexualized. Although there are definitely more female sportscasters and journalists than 20 years ago, they often have to “prove” their knowledge far greater than their male counterparts in order to get the job and they are not often reporting on female events or athletes, and they deal with ridiculous comments about being the “hottest reporter” or questioned on whom they’d like to date. There is a significant lack of recognition for female accomplishments (only 5% of coverage is dedicated to women!) and they are regularly overshadowed by similar or lesser male accomplishments. We still have instances of concern over our womanly body parts getting damaged. Women are not represented at executive levels at major news networks and other media or at the organizational level of sporting events. Without that representation and voice to push for a more equitable share of news time, how will women ever be promoted? How will young girls know there are these opportunities available for them if they never see a role model?

Even in stock photography, it proved quite difficult to find a photo for this blog! Type in “photographer” and there are a number of adventure and outdoor related male images but all the female photographers are much more…let’s call it whimsical. Looking at these images leads me to believe that women are incapable of taking photos in the wild. I next searched “female athlete” (both terms) and these are the photos that came up within the first few rows: 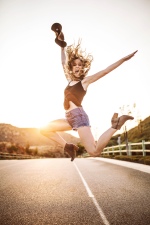 WEEEE!! I wear short-short jean shorts when I sport!

A comparative search of “male athletes” (just for fun!) netted…a wide range of male athletes in various activities, none of which were sexual, off topic, and the water ones were swimming or surfing. No random bathing suit model.

Stock photography is a simple example of the lack of respect and representation of women in sports, particularly outdoor sports. It clearly shows the disparity that exists and demonstrates that women are definitely not provided equal opportunity.

And that’s why we need feminism still.

Feminism: embrace it and make this world better for…everyone!

How are you enjoying winter? What gets you #outside and #active? Tag @active_women in your photos with #activewomencanada and be featured on www.activewomen.ca #activewomen #winter #winterwonderland #skiing #skitouring #mountains #outdoors #lupus #lupuswarrior