It’s a recurring conversation I hear amongst the women whenever I head out on a ride or ski, be it an all-ladies or a mixed group:  there’s a competition about who will be the slowest.  There’s a vast array of reasons for being the slowest that day but, the bottom line is, at least one person feels the need to comment how slowly or poorly they’re going to perform.  Why is this?  Why, as women, do we feel the need to engage in this harmful talk?  I never hear these types of comments from my male friends.

On a recent bike ride, I asked this question:  Why, when women crash, do we engage in heavy self-deprecating talk and why don’t men do the same?  After a (not-too-serious) crash, women turn to blaming themselves, that they obviously did something wrong, and the negative talk spirals down into what a terrible rider (or runner or skier or whatever) they are.  Conversely, when the boys fall, there’s a general cheerfulness and comments on what an “epic” crash it was:  they spin the crash into a positive and lighthearted event.

Scott’s answer: “Because men are too arrogant to admit they did something wrong!”

He continued to explain that of course it’s not “his” fault that he fell, it was the trail’s fault.  The tree came out of nowhere!  That rock wasn’t there before!   I think he’s on to something – many women definitely fail in the high self-confidence category.  Without a doubt, this is a learned trait we inherit from our moms, older sisters, aunts…We aren’t born with a sense of low value or worth, it is not an innate concept we have.  Women have been socialized and moulded to be demure; not to brag about our successes and to, categorically, engage in self-depreciating and self-depricating talk.  I think it also helps answer the question why there are fewer photos and videos of women doing neat-o things since that would equate to bragging.

Do you remember the Mean Girls scene where they all complain about their various body parts in front of the mirror?   One by one, they all join in on complaining about some imaginary fault(s) they have with their body.

We may not directly be taking shots at our bodies when we complain at the start of a ride or “warn” people that we’re feeling slow, but it has the same effect.  When one of us starts, the others all chime in and it creates that mind-set of feeling less confident.

Instead, why not shift and start that conversation a bit differently:

Alright ladies, so here it is!  The words and permission you’ve needed to hear all of your life:

Be PROUD of what you’re doing. 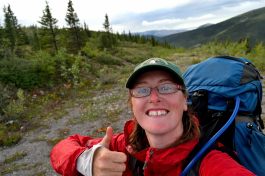 Hiking the CANOL trail was a huge accomplishment for me!

Need a bit more help with the self-talk stuff?  Take another read of Teresa’s blog on Positive Self Talk for some tips.

Prefer your lessons with a bit of humour?  Check out comedian Luisa Omielan’s take on thigh gap and self-depreciating talk!