Yup!  It’s true:  I have my long distance permit to thru-hike on the PCT and I received my entry permit to legally enter Canada via the PCT in Manning Park!  WOOT WOOT!  Oh yes, and the California fire permit (but it was the other two that were the waiting-game ones!).

In an attempt to lessen the impact of “the herd”, there’s a new quota system for thru-hikers.  You can read about it on their website on their permits page  but, basically due to the significant increase in numbers, there is a concern for the desert ecosystem and its resources.  The permits page reports issuing 1,042 permits in 2013 and 1,468 permits in 2014 and, as of today, 1,344 out of 1,500 (thanks to my graphing & spreadsheeting geek friends in the PCT 2015 Facebook Group for that information!).  It meant I actually had to choose a date, so I did: Monday, April 27th.

There’s no “real” reason I chose this date, it just seemed to work well.  It’s right after the Annual Day Zero Pacific Crest Trail Kick Off (ADZPCTKO) which is a weekend that provides information, workshops, and a good networking opportunity for fellow hikers to meet (there’s actually two happening this year due to the numbers!).  I’ve opted to skip this weekend.  It’s not really my style.  Adam and I went to PCT Days in Cascade Locks, OR last September and, for me, it was just a loud, drunken party and not something I got into.  There are definitely neat workshops and I know ADZPCTKO will be a bit different but…I’m not convinced it’s for me.

I have nearly all my gear dialled in!  Just a few miscellaneous items (like hiking pants, sleeping bag liner, and maybe an Ursak) that I need to finalize but I feel I could probably pack up today and head out.   My two major pieces that I need to finish up are figuring out my cell phone situation and finish up my food & their resupply boxes.

Funny thing about food…I’m not quite where I had hoped to be.  It hit me yesterday that I’m leaving for the trail in 8 weeks which means I need to actually have my resupply boxes ready to go in about 6.5 weeks to give them time to get down to my earliest resupply points!   I’ve done the math so I have a figure on a spreadsheet about how many meals I’ll need (I’m not really worrying about snacks). 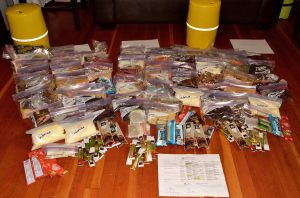 BUT THEN I also know I’ll be able to buy food along the way in town so, on top of eating meals in town, I’ll also be able to buy a 2 or 3 day supply of food from resupply points.  I made a spreadsheet for that, too, so now I figure I’ll need about 288 meals.

I have 91 (actually, I have 4 trays in the dehydrator so I should be up to 99).  That sounds a bit better but I do need to keep that dehydrator going full-speed but I’m almost positive I don’t have enough days to make 189 more meals…oopsies!  I may need to borrow someone’s dehydrator!

I’m really not too worried and I’m sure things will work out – things tend to if you’re open about it!

I best be going though and start making an aggressive food cooking and dehydrating plan!

As a note, I know I’ve been unable to provide any more features on Awesome Active Women and I apologize.  I expect to post TWO women this month to make up for February!

How are you enjoying winter? What gets you #outside and #active? Tag @active_women in your photos with #activewomencanada and be featured on www.activewomen.ca #activewomen #winter #winterwonderland #skiing #skitouring #mountains #outdoors #lupus #lupuswarrior