I’m so incredibly happy with the increase in women’s specific adventure-y type films and photos.   I’ve been noticing a significant amount of women being present and featured in various photos and films and it always makes me smile and give a little “You go, girl!”…sometimes out loud, sometimes just in my head.

I’m unsure if it’s just where I’m searching, but I’ve noticed a greater increase in female focused mountain biking videos than I have in other outdoor sports.  I tend to come across more amateur and professional standard female-centred mountain bike videos than other sports; including very recently, even though we have fully left summer behind.  I noticed an increase in these videos (more so than photos) throughout the summer and I had been anticipating a similar shift as winter sports take hold.  Sure, there are definitely a lot of skiing and boarding videos to be had but I have yet to come across one that features and focuses on women (hold that thought, there’s a caveat!).

Out for a tour with 3 dogs.

Most of the videos I watch I tend to find on high-profile, main stream websites or Facebook pages (such as Outside Magazine and Backcountryskiingcanada.com).  I can’t recall a single ski or snowboarding video prominently featuring women yet this season (have you seen one?).  However, simply browsing PinkBike (a very popular mountain biking website), I find it quite easy to come across female-centred mountain biking videos and articles.

As great as it is to see the increase in featured women in videos, I started to notice a lack of women in the credits of the video (or a photos).  It was a PinkBike featured video that, for whatever the reason, really made me ask the question “Where are all the female photographers/videographers at?!”  Even the much lauded “Pretty Faces” ski movie this fall (the above noted ski-film caveat), a ground-breaking film produced by Unicorn Picnic, ended up having predominantly male videographers and photographers in their credits.  You’ve likely heard of Lynsey Dyer, she’s basically an all-mountain skiing rock star.  She noticed a huge gaping hole of women in ski films.  Sure, women have been in other ski films, but they’ve been bit parts, token shots…according to Unicorn Picnic, women were represented in only 14% of all ski films’ footage (I believe a 2013 statistic) and that was up from 9% (!) the previous season.   So you can imagine my excitement when I first read about the project (and how stoked I was they actually had an opening in my town).  I was really, really happy to see Pretty Faces.  It is a wicked film and I highly recommend it.  But…

The but…when watching the credits I saw very few female names within the videography roll-call (and, I know, you most definitely can’t judge a gender by a name!), but when a friend posted this Women’s Adventure Magazine link on my Facebook page, it definitely cemented this intuitive notice of a lack of 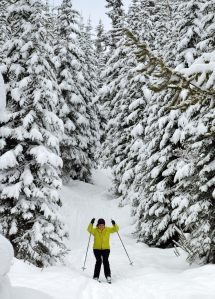 female photographers and videographers, especially within the adventure-sports field.  When I watch these films or see amazing photos, I ask myself “Don’t they have any female friends that could help take these shots?”  The article noted that in a recent UK film festival only 20% of submissions were by females.  This makes it a non-traditional field for women, with 25% being the crucial number (and critical mass numbers indicate that 30% is the key).   Are  women just not submitting?  Or do women adventure videographers and photographers just as elusive and in hiding?

With 40% of the skiing population being female, we know that women aren’t solely skiing with men.  So

why aren’t their female friends recording them?  I obviously don’t have an answer, perhaps you do.  Better yet, do you know of any female photographers and videographers (both professional and amateur)?  I’d love to be able to share and promote their work!

How about yourself? Do you have some fun photos of being outside and active?  View and share at #activewomencanada on Instagram!